On the Sunday just gone (12th Dec), Greenstage with the assistance of Stud Welding NZ and Athol Williams hosted a EV and Smart Grid focused gathering attended by a variety of people from with commercial, academic and engineering backgrounds. With a range of interesting items on show and some thought provoking presentations, it was an exciting mix. Read on for some of the highlights...

First up Michael Stewart and I covered off the GS750V, where we are at and where we plan to take it as low volume manufacturing options are explored. This included vehicle mechanicals, the Inverter and BMS development (with reference to the Tumanako project, the home of this technology) and battery technology options.

As you will know, the battery technology in a vehicle like this is essential to the end result and we are not willing to compromise with our technology or business relationships on this front. It's early days yet, but we think we have finally found the perfect solution to the dilemma posed by the requirements of the GS750V. We recently became aware of a new 20Ah Lithium Iron Phosphate cell capable of 300A continuous. These cells are definitely in the sweet spot with respect to our energy and power density requirements. We expect to have sample cells in January for BMS tuning and development.

Stay tuned for updates on these puppies!
Michael also gave us a sneak preview of the Saker GT and Stewart Zen inspired MKII look for the future. There is a lot of potential here. 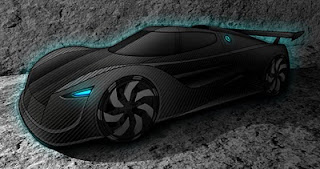 Secondly, Ed presented the combined AC Controller, Charger and V2G design which has been released as part of the Tumanako project. 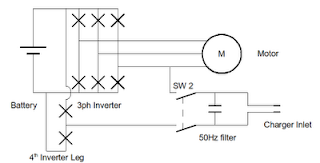 Not only does this remove the need to lug around a separate charger or to hunt down a compatible charging station, it will also be significantly cheaper as it utilises the same hardware required to drive the vehicle's electric motor. All of a sudden, not only can your EV charge itself from any power socket, but you also have a UPS on wheels!

After a break for BBQ lunch (kindly provided by TradeTech), John Gorman and Matt Magoffin presented the SolarNetwork's progress. After back-grounding the project and software architecture for the Open Source smart grid John listed a range of new inverters being supported. He also showed off a few of the physical configurations being developed by Greenstage Power for the purposes of supporting distributed generation companies.

One of the new grid tied inverters to be supported by the SolarNetwork in the new year is from Enasolar. These amazing inverters will be forming a central component of an engineering and technology show room we will be putting together early next year.

A particularly note worthy announcement from John, was that the NZ Solar Decathlon team have chosen the SolarNetwork as the framework for their FirstLight Energy efficient design. The NZ team is the first ever southern hemisphere team and they have been selected as one of 20 international teams to compete in the U.S. Department of Energy Solar Decathlon 2011. We will be backing these guys full on, so expect to see more success and Kiwi can do attitude on the world stage next year!

Finally I just wanted to give a heads up on a number of exciting but unrelated things that came out of the day.

1) Mike Duke from the University of Waikato announced plans for the first ever NZ EV rally from Cape Reinga to Bluff, starting on Sunday the 22nd of January 2012 (just over a year away). The event will focus on vehicle efficiency, practicality and fun. To be held over one week, with a number of preplanned stops along the way, the rally will be an event not to be missed. The event will cater for both NZ and international teams wanting to demonstrate their technology and compete in a real world environment with controlled and measurable outcomes. More details will be available in the new year, contact Mike Duke (dukemd@waikato.ac.nz) for information or to register your interest (Greenstage will be there!).

2) Jason Whaanga from Advanced Eco Solutions had some Life Batt cells on display and also had a pack being put to good use in a vehicle called the Scarab EV. Here is a picture of it with its lid off (yes its a single seat three wheeler). 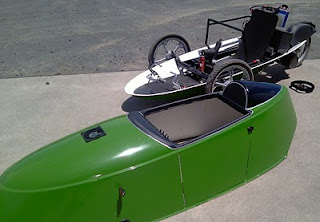 This is the first of its kind and the plan is to standardise the build process and provide kitsets to the public with the possibility of establishing a cost effective Scarab EV race series. I'm keen to see this happen! Its a nifty little vehicle that will leave a smile on your face.

! For those that don't know, rFactor is a very realistic racing simulation game. We have wanted to see the GS750V in rFactor for a long time now and it's finally been done. Big thanks to Dave and Brendan for providing and showing off the first ever Electric Saker Mod. It's still a work in progress but as a first cut these guys have done an amazing job. The only major flaw I could find was that the well presented GS750V sounded and performed suspiciously like it had an internal combustion engine!? :) A number of different people had a virtual drive over the day including myself, it was a lot of fun!

Here's a shot of the guys testing it out... 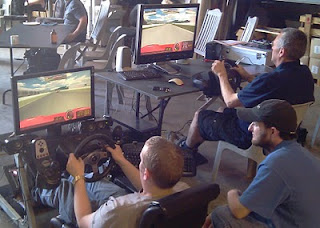 There were plenty of other things happening and being discussed (such as Peter Sewell's very tidy electric Celica and Bruce Turnbull's not so electric Saker GT) and these were just some of the highlights from my point of view. I know I've missed a few (e.g. the fact that Alan took out the Formula E go carting final with ease after narrowly avoiding the marshal's dreaded go-slow button), so if you had your own personal highlights, please feel free to comment on this post to share your experience.

Again, a big thanks to the Greenstage crew, Stud Welding and to everyone else who was present and contributed to the day. Your ideas, contributions and discussions are what makes these events worthwhile. With a collaborative approach and open technology we can all expand our horizons for a better world. Better business, better technology and better results. Expect to see a glimpse of this in the new year.

The all posts are great.The color combination are great.After seeing all the posts i am fully exited to know deeply about this.Can you post some more blogs like that.Thanks for the post.I am waiting for your new post.
Emergency car lights